The Bench: A Tale from Paradise Heights

The Bench: A Tale from Paradise Heights will return with a completely new cast in early 2023. With the state of the UK right now, there's never been a better time to bring this back, it will be more relevant than it has ever been.  Venues and dates will be announced in the next week...Joe x 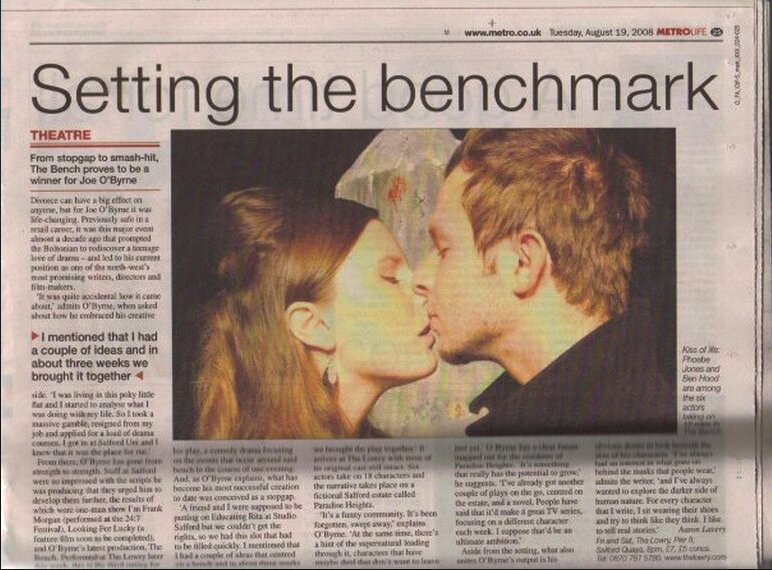 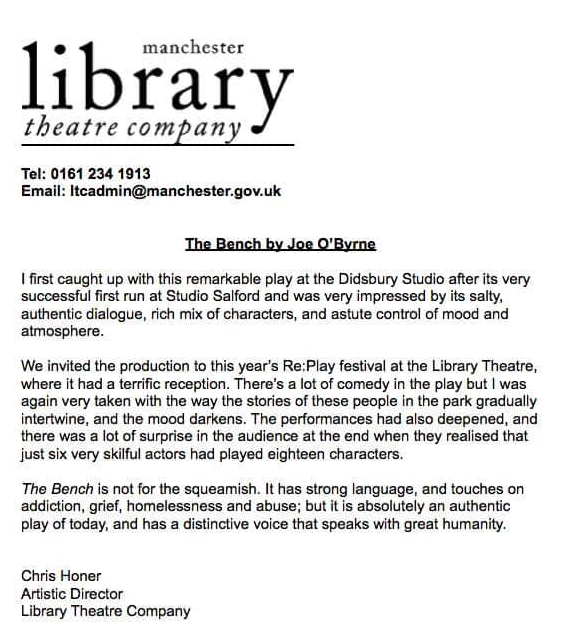 '...that's your Undiscovered Country love - the future - not death...' TheBench:
A Tale from Paradise Heights

It's just a bench in the park, the one by the war memorial. A thief, a fake clairvoyant, a homeless man, two teenage burglars, a street sweeper, two war veterans, an artist, a widow, a drug dealer, a real clairvoyant, a loan shark, an angel and a ghost. They've all sat here at least once this year. Before the end of the year one of them will be murdered here...

A comedy of love, life and loss.

Age 16 plus due to adult language and themes. 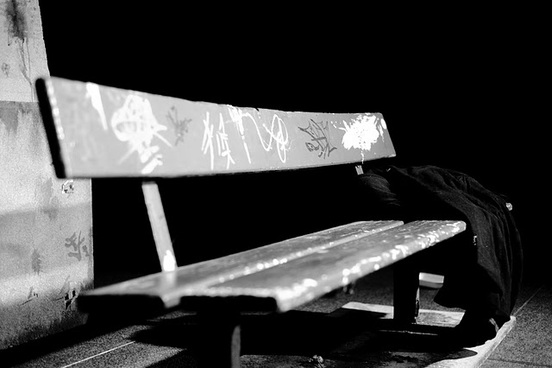 Written, produced and directed by Joe O’Byrne, this sharp and telling play features all manner of fascinating characters whose lives and loves intersect over the course of a year near a park bench. Highly recommended and a play and writer that will surely go on to great things.


Like Jim Cartwright, O’Byrne has a knack of finding poetry in the most ordinary situations: he also has real affection for his characters, and they feel like flesh and blood people.


The quality of production and script that we would expect to see on the main stage of one of our region's leading theatres.

O’Byrne makes us care about these characters as people, and his direction is faultless.   There are no histrionics, no patronizing of his audience, and no overt moralizing in this snapshot of 21st century life on the streets of ‘broken Britain’. The Bench is giving it to us like it is no frills theatre with balls and undiluted attitude.

Therein lies the skill in Joe O'Byrne's writing; not just fantastic dialogue, but like all great scripting, it is in what the characters in The Bench do not say, or say without meaning to, that reveals their flaws, hopes, dreams and terrors.

When are TV commissioners going to wake up and find Joe O'Byrne?

Loved it! Wonderful gags out of left field, intrigue, suspense, heart-rending scenes and heart-warming moments. A great night of theatre! Do more! After the frustration of the post production period on LOOKIN' FOR LUCKY I was itching to get out there doing some acting again  and I let a few people know that.

I was approched by Ste Myott (now a Paradise Heights acting regular) and he told me he was directing EDUCATING RITA at STUDIO SALFORD and he'd like me to play FRANK.

However on approaching Willy Russell's agent we found we couldn't get the rights as they were doing something with it.
Ste was about to cancel the dates with STUDIO SALFORD but I asked him if we could put something new on there instead, they agreed, now all I had to do was write it.  I already had plans to extend the Paradise Heights world further, and I'd started work on something, this would give me the incentive to get writing again and finish it, nothing like a deadline to get the adrenalyne pumping.

I work Sundays for the probation service as a Community Service Officer, this involves me going out supervising offenders on various projects in the  community, everything from painitng church halls, clearing pathways, various gardening projects etc.  I had been working with a group of six lads for sometime in a church graveyard, landscaping and generally keeping the grass down and the flower beds tidy.  One week we installed a bench in the grave yard, and during lunch I had sat on it, looking out across the grave stones and I just thought 'I wonder how many people will end up sitting on this?  What will they talk about?  What will be goin on in their lives?'  And that's when the inspiration hit me - I'd write a couple of scenes set around a park bench in a municipal park in Paradise Heights, and I'd also have a war memorial behind the bench, and a bin - that would be all I'd need in terms of a set - simple, manageable and cheap.  The play would be a great device to introduce a range of characters that I could feature in future plays from the series.

References to I'M FRANK MORGAN and LOOKIN' FOR LUCKY set the story firmly in the same world...and of course Frank pops up... I had two scenes written, and less than 7 weeks to go until opening night, so I got cracking, finished the play inside three weeks and the play saw 17 new characters introduced to the Paradise Heights estate - and the return of one very bad man - loan shark Frank Morgan.  I was directing and planned on playing Frank in one scene in the play - that plan changed when Ian Curley asked if he could read for the part.

Ian did a fantastic reading, so much so that I had no hesitation in casting him as Frank, a decision that really helped as Ian would later be directing me in my return to the role in the original play's return to The Lowry.  The very talented Mr Curley also designed and built the war memorial and set.

The play is written for six actors to play all the parts, and (as I learned from it's first run!) it's best to keep costume changes as simple as possible.  Although billed as a comedy, it does address some disturbing issues throughout, and the cast are really put through their paces.  It's demanding and physically and mentally exhausting but each run has been blessed with an amazingly talented cast who should all quite rightly be proud of their work, it's an emotional roller coaster ride for the cast and audiences.

Thus far the cast have included Greg Kelly, Erin Shanagher and now Bench regulars Clyve Bonelle, Ian Curley, Stella Grundy, Ben Hood, Phoebe Marie Jones, Ste Myott, Aaron Rochford, David Edward Robertson and Richard Allen. Each and everyone of them have played out of their skins on each performance of The Bench.

This play really touches audiences, there is something about it and it has generated more discussion than any of the other pieces I've written up to now (2012).  Two of the characters - Corny the ghost and Shirley the Angel - would return in the next production from Tales from Paradise Heights - RANK

More on RANK at this link:

THE BENCH: The Novel 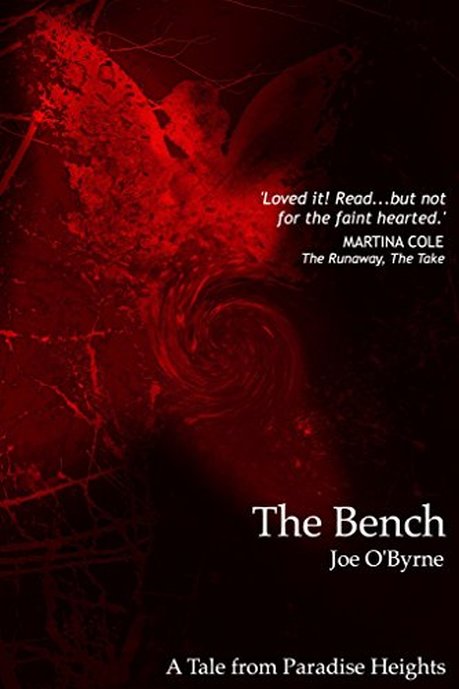 I've been threatening to do it for decades.  I decided to take my play THE BENCH and transform that into my first novel.
To tell a tale laid out in twelve months, twelve chapters and show more of the world that the constraints of a stage would not allow.  But as I revisited the characters I found so much more in them, and a much more vivid world than I'd originally imagined and therefore there is much more here than in the play.  It's a fully formed world and it has many seeds sewn for future novels, future Tales from Paradise Heights.  I have a great sense of achievement as the novel has always been just out of my grasp.  Not any more.  I'm bitten by the bug and there will be more novels to come, more Tales from Paradise Heights in novel form.

The play has always been much loved by audiences, some seeing the production five times or more in prestige venues like Salford's The Lowry, The Octagon Theatre, Bolton and The Library Theatre in Manchester.  The reviews for the play have always been glowing so it seemed a good cornerstone to build a series of novels around.  I'm glad I chose it, I've loved writing it.

Thank you all, the actors, audiences, technicians, photographers, film crews, reviewers, and theatres without whom I would not have reached this point.  And a HUGE thank you to the great Martine Cole for reading the book and giving me a lovely quote.

I'm obviously looking for reviewers, publicists and publishers now, but for now here's a link to the ebook novel online.

In the meantime I'm considering my next novel now from the Tales already featured on this website...onwards and upwards...and The Bench - the play - I'm looking to bring that back in 2020, never has the time seemed more right.