However in August of 2016 I thought I'd have a go at my first canvas, and I really got into it, loved the escape of it all - tunes on, acrylics out and then getting lost in a canvas.

They are all large pieces and I'm working on quite a lot of them now, learning loads as I go and the plan is to have my first exhibition by the end of the year with a view to selling a few on, though I have no idea how to go about that.  I've set this page up with a view to show progression from blank to complete canvas - as much as for me as for anyone else, and to log my own progress.

The main point is I'm enjoying it, and it takes me away from the overly real world, and today that's a pretty good thing...

I now have a website dedicated to my splashings...

I'm happy to say I've sold a few too! Onwards and upwards...Jx 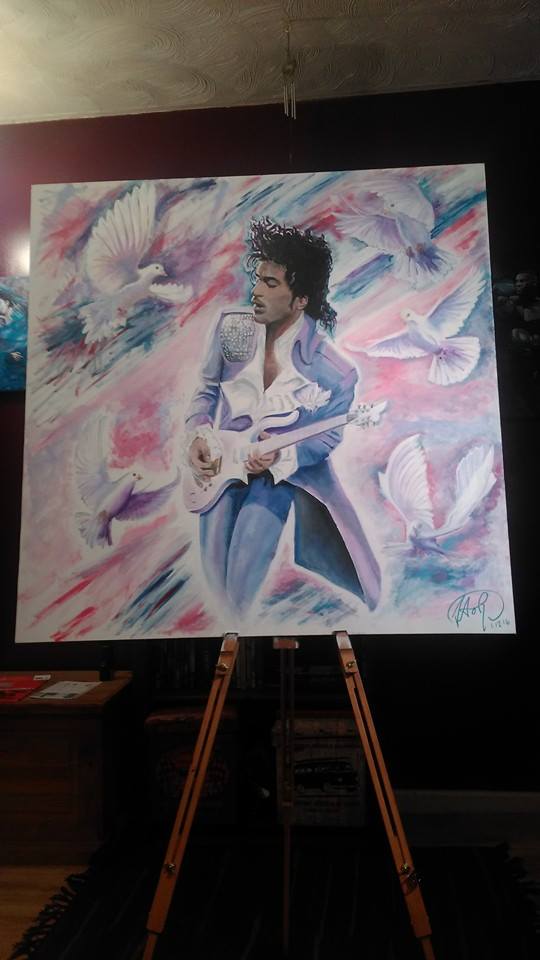 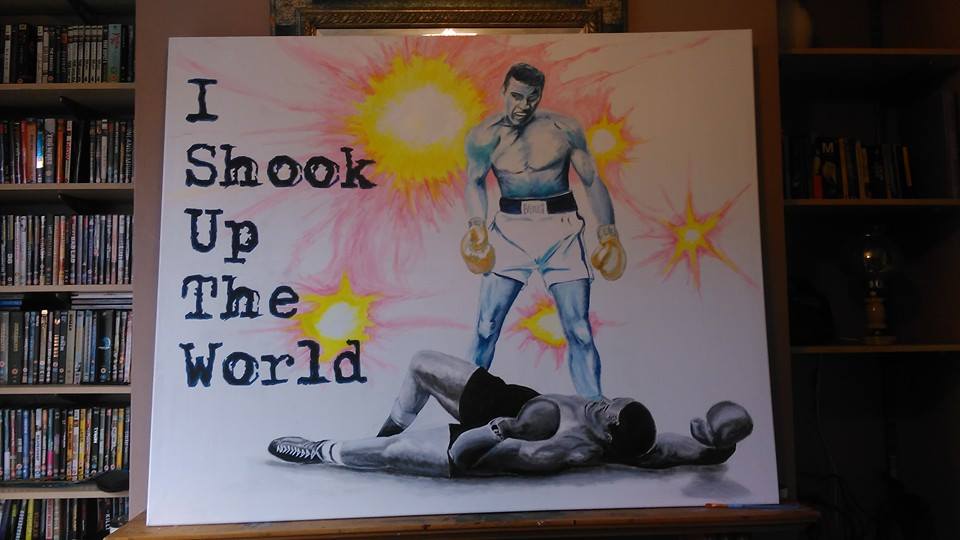 The loss of the world's greatest boxer triggered my inspiration to capture him on canvas.  A man who made his name in early life putting people on the canvas.  But this man was so much more than the greatest boxer, he was a huge historical figure with monumental soul.  I chose to make this one my biggest canvas so far.  I also chose the night that introduced the then Cassius Clay to the world, February 25th, 1964.  The night Cassius Clay beat Sonny Liston in Florida, and the night Caly repeatedly shouted that phrase 'I Shook Up The World...'  He'd shake it up a lot more.

It was a black and white moment in history, filmed in black and white, I wanted to do something with it colour wise and introduce those camera flashes behind, I like this one. 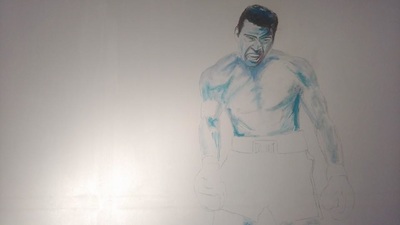 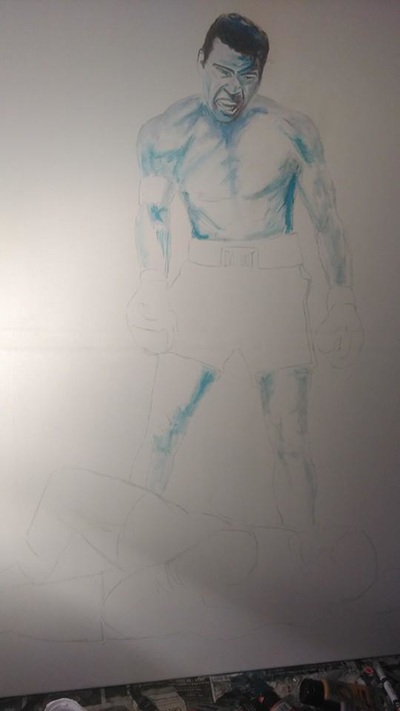 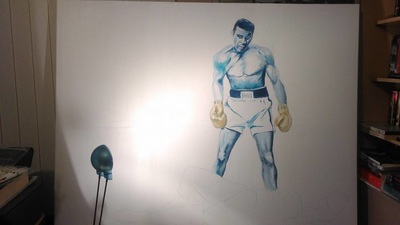 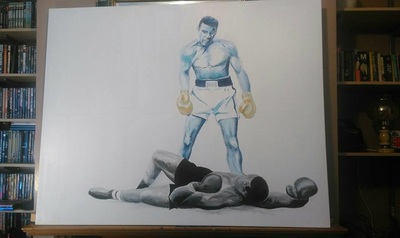 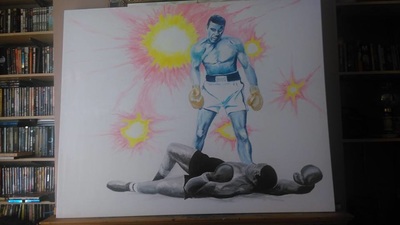 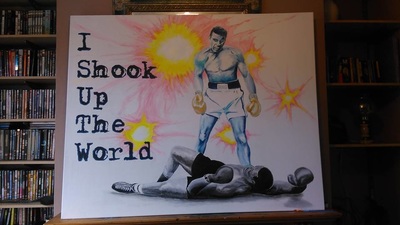 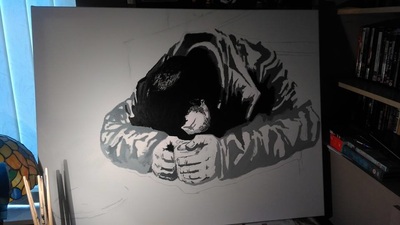 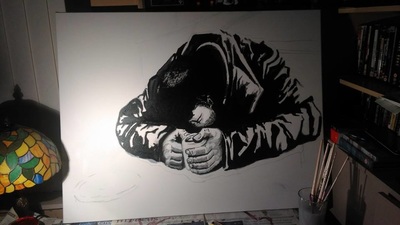 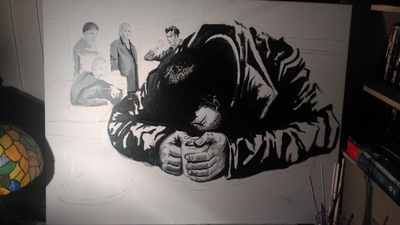 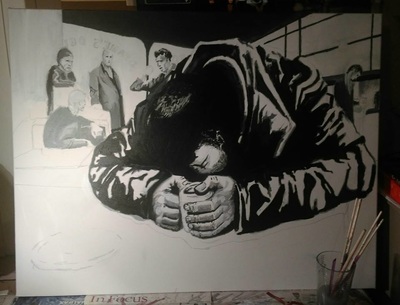 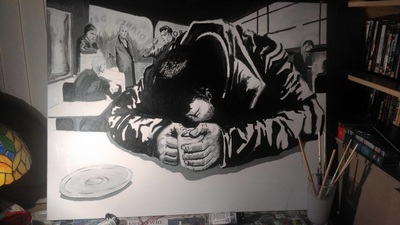 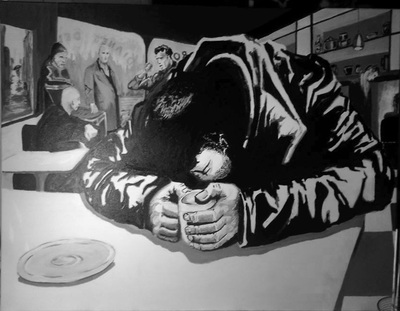 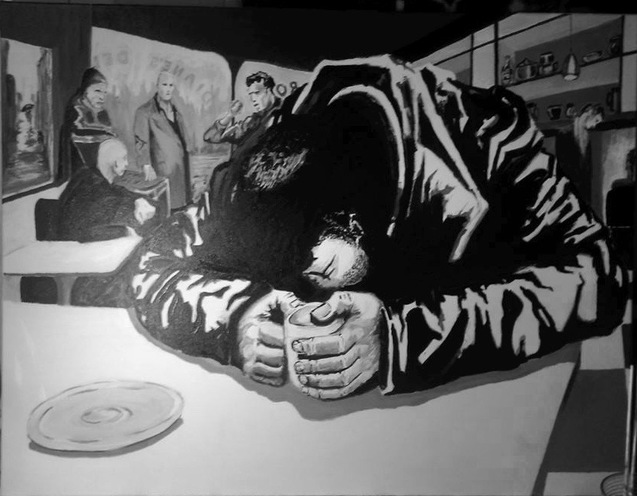 Corny 'Pitbull' McGeehan appears in two of the Tales from Paradise Heights, THE BENCH and RANK, and is referred to in a further two plays, STRAWBERRY JACK and DIANE'S DELI.

An ex boxer struck down with Parkinson's disease,  he initially appeared as a ghost in THE BENCH.  Audiences really responded well to him, so the play RANK told the tale of how Corny met his end.

By painting him in Diane's Deli it kind of fused the work and world together a little more.  There is more information on all the above plays throughout the site.

TOM WAITS FOR NO MAN 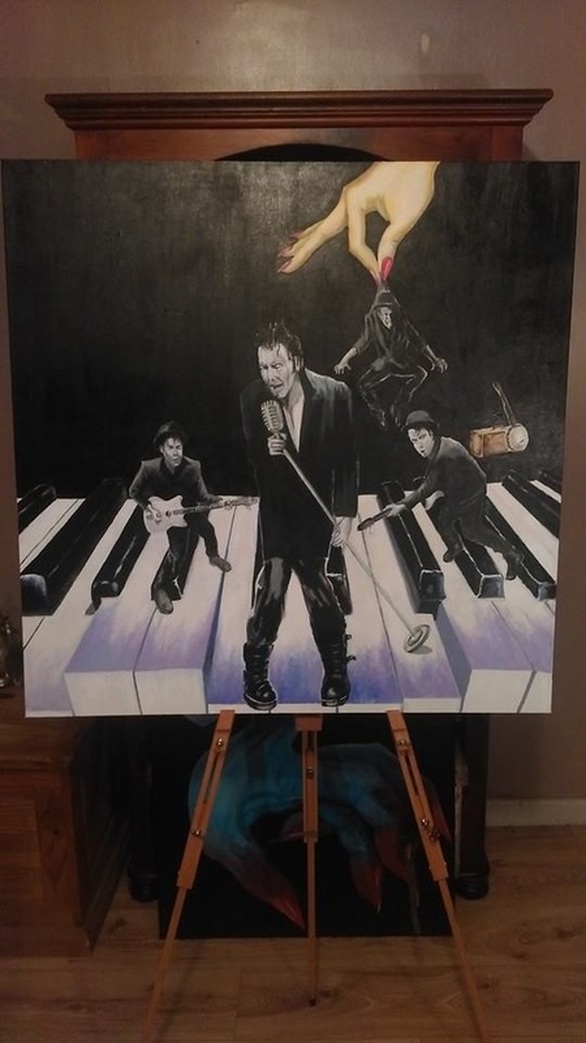 This is for my 7 year old grandson, Lucas.   A large canvas for his bedroom wall, only I keep getting stuck, I should have sketched it ALL out first, not just the small concept sketch you can see below.

I wanted something above the lamp post on the building on the right and opted for - yes - The Joker...without thinking that this would freak the hell out of him.  It actually freaked the hell out of his mum...lol

So I've finally finished it, changed it quite radically and really enjoyed doing it, hope he likes it :D
ELVIS DEATHLY: HEARTBREAK HOTEL
A study on loneliness, influenced by the opening titles of JESSICA JONES... 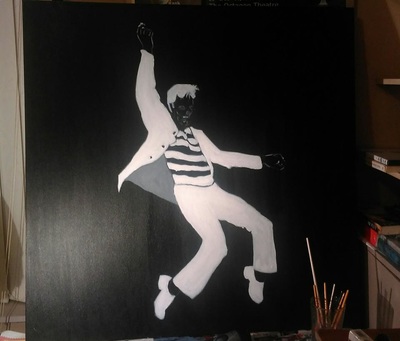 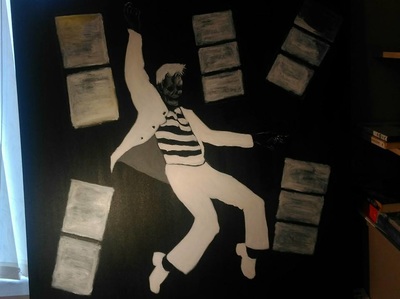 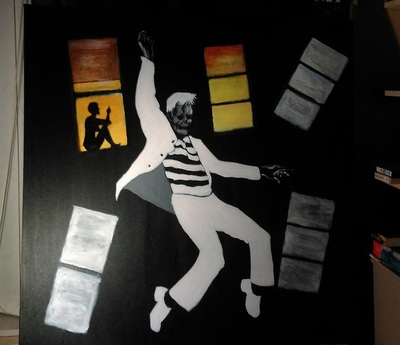 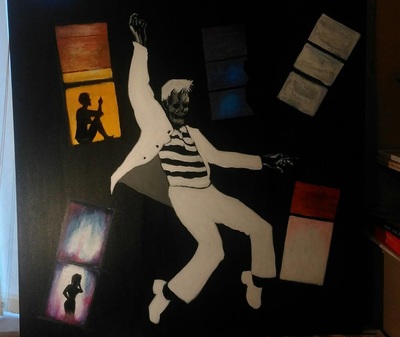 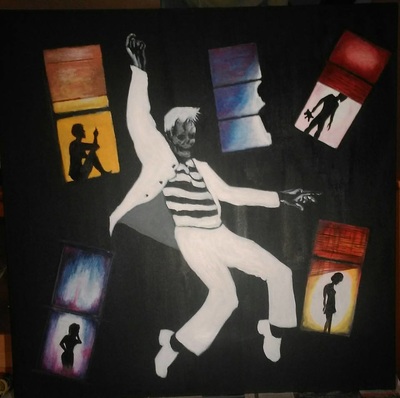 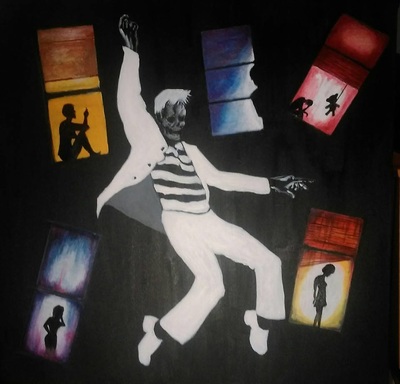 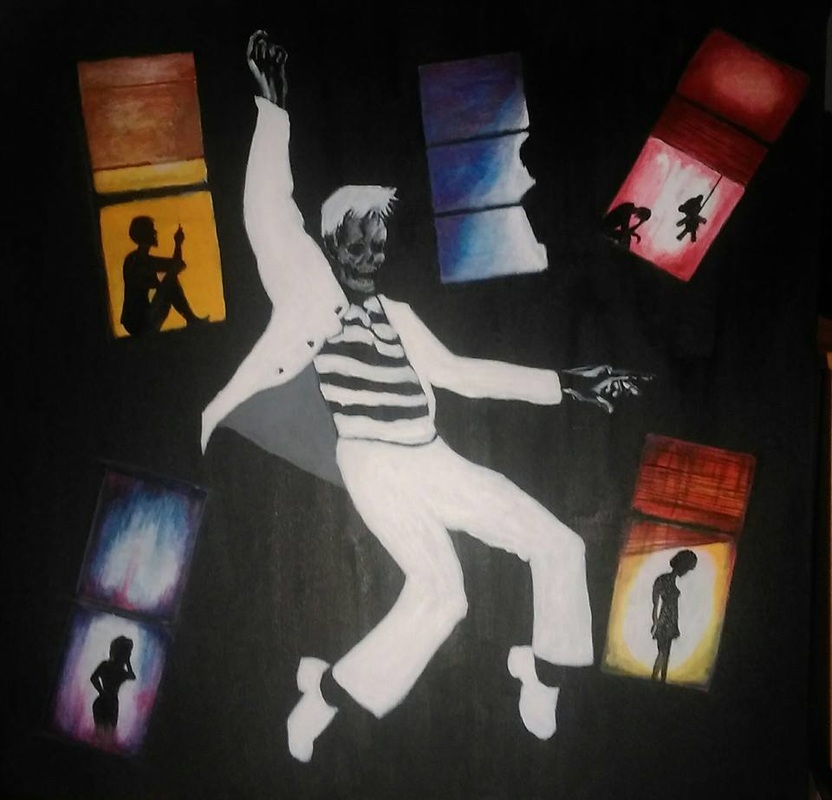 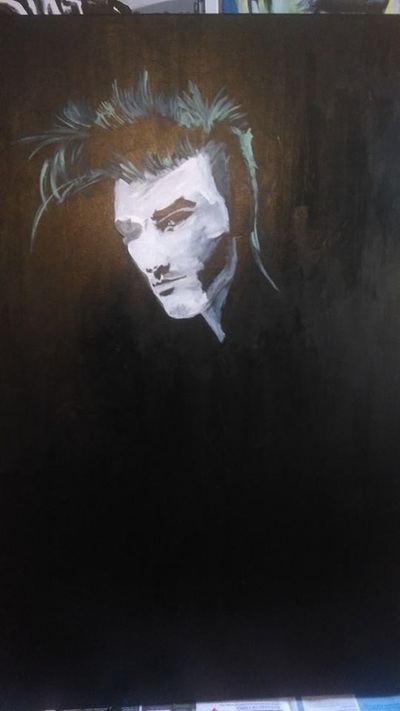 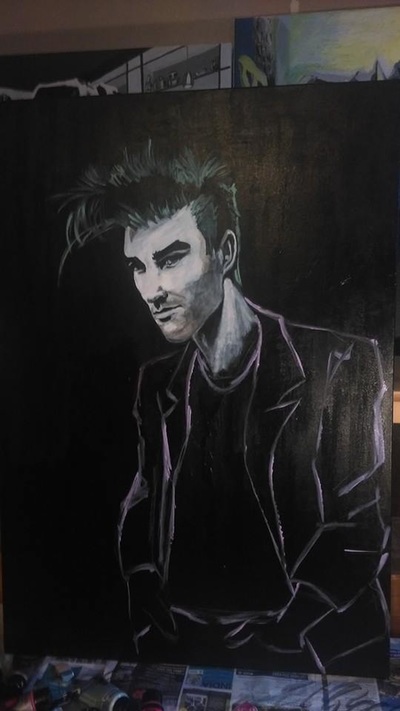 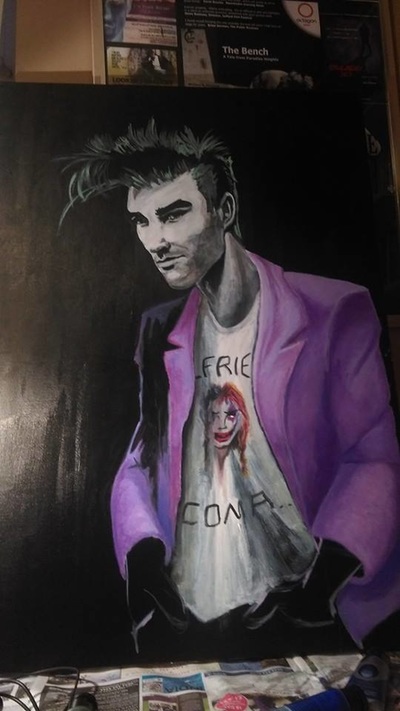 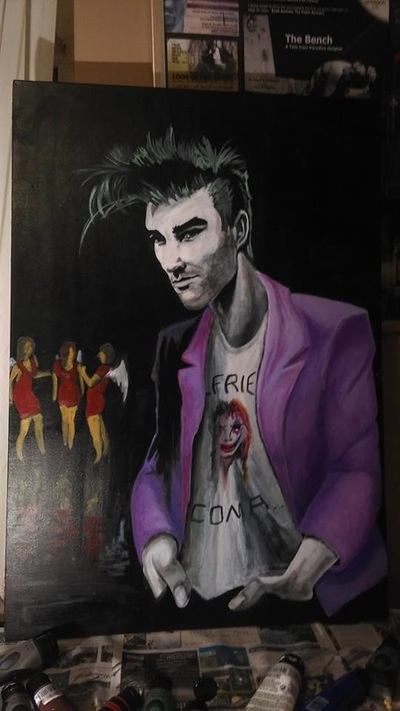 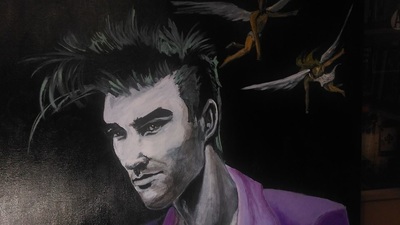 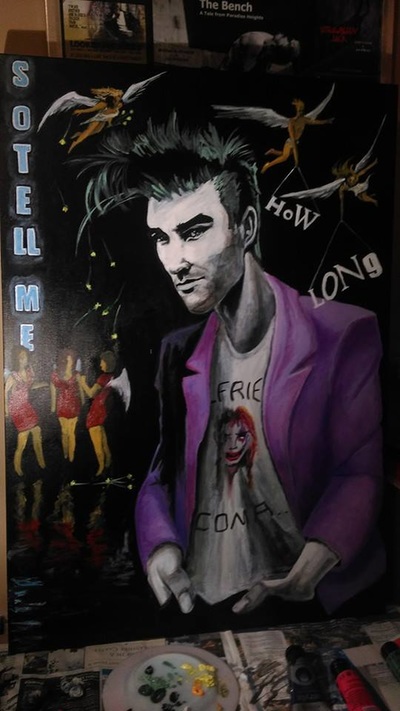 ALL ARTWORK ON THIS PAGE IS BY, AND BELONGS TO, JOE O'BYRNE.
​CREATED FOM AUGUST 2015 TO PRESENT.