'Maybe I'll tell you the tale of the eye that died, over a whiskey and dry...'
Jack Grundy 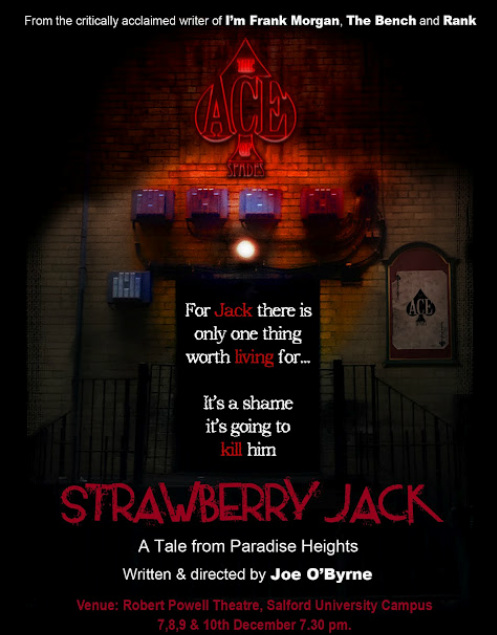 Strawberry Jack Grundy was a wild child that grew into a ferocious man. Once the War Horse of Paradise Heights, recent events have stacked the deck firmly against the One Eyed Jack of The Ace of Spades Nightclub. He is now a fading shadow of the man he once was.

But the rescue of a girl on the mean streets of Paradise Heights thrusts Jack into a situation he has never faced before, untapped feelings stir, and a frozen heart begins to melt. But One Eyed Jacks aren't always lucky; someone wants Jack dead by Christmas. They say Christmas is a time for Angels...a time for miracles.

Well Jack may have found his Angel.  Now all he needs is a miracle... 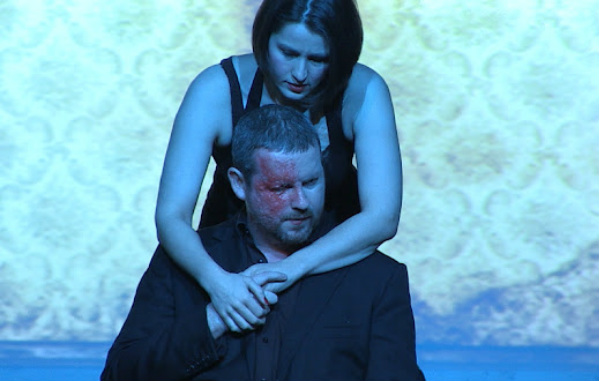 STRAWBERRY JACK premiered in December 2011, and will be returning soon.  In what was a busy period for reviewers and new shows, we managed to get two reviewers along to the premiere run of the show.


The dialogue is pungently, darkly witty, shot through with unforced pathos and flashes of real poetry.  But it's also Paradise Heights. And even Charles Dickens wouldn't go there without someone riding shotgun.  With a master storyteller’s skill, O’Byrne sets up all of the mechanisms that we know will damn and destroy his protagonist, then puts them into motion...Strawberry Jack find Joe O'Byrne at the top of his (considerable) game...5 Star Review

How does he keep doing it?  I ask myself this question every time I have the great pleasure to witness the birth of yet another classic piece of theatre from the mighty JoeO’Byrne. The Bolton-based writer/director/actor unleashed his latest creation, ‘Strawberry Jack’ this week, and delivered yet another 5 star effort. We should be used to this by now. Consistency is this man’s  middle name, and work of this quality will surely find a bigger audience soon. ‘Strawberry Jack’ is the latest installment in O’Byrne’s series of plays located on the fictional northern England estate of Paradise Heights...‘Strawberry Jack’ has more twists and turns than Tarantino, a good deal more originality than any Guy Ritchie geezer-fest, and comes straight from the heart. O’Byrne’s  aim is true, and if you’re fortunate to be in the line of fire, then whatever you do, don’t duck; stand rock steady and take everything he offers. Give him and his incredible cast and crew your undivided attention.

The play finished in The Public Reviews Top 50, out of over 2,000 shows they had reviewed that year.  We were competing with world famous directors and actors in the West End, many of the productions were classics and world famous productions.  To date the show has only had one run - it's due to return to The Octagon Theatre in early 2013 and we are actively seeking further venues.

Origin:  Angel of The Heights 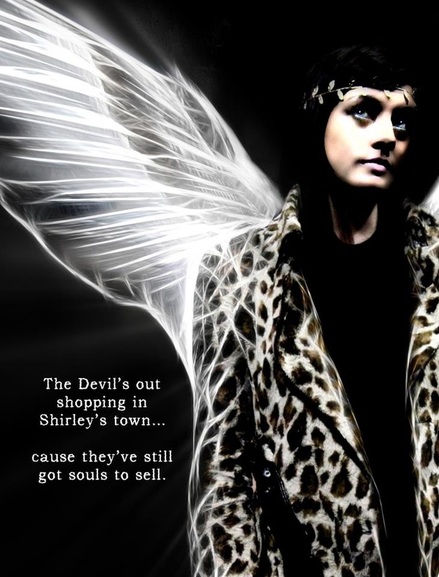 Image: Darren McGinn
Who is Shirley?  Is she an Angel? A ghost? A mad woman?  She doesn't have wings but she could certainly be described as The Angel of Paradise Heights.  She first appeared in The Bench, looking after the troubled ghost of Corny MacGeehan.  We also encountered her in Rank, as Corny's strange companion in those last few hours of his life.

The first time we met Corny in Rank he was lying unconcious beneath a railway arch after a ferocious punch from by a night club door man, a doorman by the name of Strawberry Jack Grundy.  We never met Jack,  all we heard about him in Rank was his name, and that he was a doorman in Frank Morgan's club, The Ace of Spades.

I always knew I'd get around to telling Strawberry Jack Grundy's tale next.  It was a chance to introduce another character too, a character talked about in The Bench and Rank; Deaf Freddie, head door man at the club and feared right hand man of Frank Morgan, we'll be seeing more of Freddie too.   But I also wanted to introduce the club itself, or at least the outside of it and the staff bar.  We'll get to venture into the club itself in Torch, next in the Tales from Paradise Heights series after the upcoming Diane's Deli.


So, Shirley has business with Jack, very different to her relationship with Corny, and we got to see another side of her.  Important, as Shirley has her own place here.  With a history fleetingly referred to in The Bench, she has her own story arc and I'm far from through with her.   Does she appear in Diane's Deli - the next Tale from Paradise Heights?  Well I'm not gonna spoil it - you'll have to find out yourselves, but another character well known from The Bench will appear, and I'm not talking about Frank Morgan either...